— Unfortunately, due to budget cuts, Los Adaes is closed indefinitely —

Los Adaes, the symbol of New Spain in Louisiana, was once the capital of Texas and the scene of a unique cooperation among the French, the Spanish and the indigenous Native Americans. An area rich in archaeological finds, it thrives today as one of Louisiana’s most intriguing state commemorative areas.

From Mission To Capital

Los Adaes dates back to the early 1700s when a Franciscan missionary from New Spain (now Mexico), Father Francisco Hidalgo, urged the French governor of Louisiana to establish a post near east Texas. The missionary’s objectives weren’t purely religious; he knew that such an action by the French would alert New Spain and cause the Spanish government to reestablish previously closed Spanish military posts and Franciscan missions. The founding of Natchitoches in 1714 by the Frenchman St. Denis and the subsequent construction there of Fort St. Jean Baptiste had the predicted effect. In 1716, the Spanish established six missions and one fort in east Texas. The easternmost of the missions, San Miguel, was built among the Adaes Indians, only 15 miles from the French Fort St. Jean Baptiste.

An attack on Mission San Miguel, ordered by Louisiana governor Bienville during the French/Spanish hostilities in 1719, alarmed the Spanish and they built a new presidio, or fort, to counter any further French intrusion into Spanish territory. The Presidio Nuestra Senora del Pilar de Los Adaes (Fort of Our Lady of Pilar at the Adaes) was surrounded by a hexagonal stockade with three bulwarks. Inside the walls stood a chapel, guard house, barracks, wells, blacksmith shop and powderhouse. Corrals, service buildings and the dwellings of indigenous Native Americans and the soldiers’ families were located outside the palisade.

In 1729, Spain designated Los Adaes the capital of the province of Texas. This made Los Adaes the official residence of the governor, and a house was constructed for him within the presidio. Los Adaes remained the administrative seat of government for the entire province for the next 44 years. 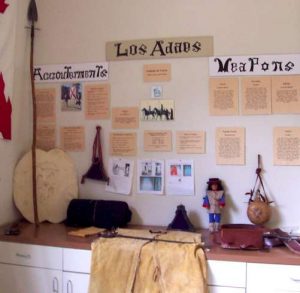 Frontier Soldier Life
The 100 soldiers stationed at Los Adaes were Mexican cavalrymen who served to defend the San Miguel mission and other missions in east Texas, as well as to escort missionaries and the governor on their travels through the province. As frontier posts were expected to be self-sufficient, the soldiers also doubled as farmers and herdsmen.

Life at Los Adaes was harsh. Poor land and crop failures meant constant food shortages and rainy weather often meant spoiled supplies. The nearest Spanish supply post was 800 miles away and that distance, combined with rain, foods and hostile Native Americans, resulted in chronic shortages of everything. Without the trade of the French at Natchitoches, the inhabitants of Los Adaes would have starved.

A Spirit Of Cooperation 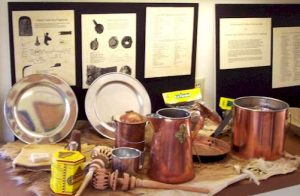 Except for one raid by the French upon Los Adaes, relations between the Spanish and French in the frontier outposts were, as a matter of necessity, friendly. Although Spain strictly prohibited trade with the French, the latter eagerly sought it. 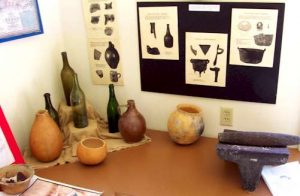 The French took advantage of supply shortages at Los Adaes, and an illicit trade soon flourished between the two posts. Even the governors at Los Adaes took part. The Indians traded with both sides and this commerce became so important that Natchitoches suffered a recession when Los Adaes closed in 1773.
Louisiana was transferred to Spain in 1762. In the subsequent Royal Regulations of 1772, Spain ordered Los Adaes closed and the inhabitants moved to San Antonio. Nearly 500 soldiers and family members endured the hardships of this relocation, and many soon left San Antonio to found the present-day city of Nacogdoches, Texas. Others eventually returned to Louisiana, where their descendants live today.

Los Adaes regularly presents programs of historical interest. Check the Area Calendar of Events to see what is coming up. In September there is also an annual “Trades Day” where traders and crafters offer and demonstrate traditional trades such as candle making, beadwork, outdoor cooking, storytelling, and more.

Unless otherwise noted, all pictures by Frank Dutton – Toledo-Bend.Com