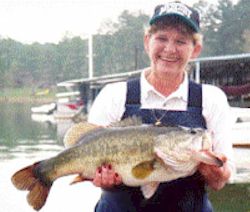 As we enter into March, the weather and fishing should become much more predictable. Although we may continue to have cool fronts, the severity shouldn’t change fishing patterns much. What’s the pattern, you ask? The most consistent “pattern” will be shallow. I find in most cases that lure and presentation patterns are more for the angler than for the fish. This means that whether you’re pitching a lizard, floating a trick worm, or jerking a Rogue, you’ll probably catch fish if you’re in 0-5 feet of water.

A very large percentage of your bass-catching success as an angler is confidence in the lure you’re throwing. Consequently, your level of confidence in the lure will cause you to make better and more accurate presentations. This isn’t to say that on any given day, a specific type of lure won’t catch more fish than another. However, you have to put the lure where the fish are and if you’re not skilled at using a particular lure, it’s almost a given that you won’t have much luck with it.

Because largemouth bass tend to spawn in shallow water on most lakes, especially in this part of the country, locating fish in the spring is relatively easy compared to other times of the year. This means that if you keep your boat in 5-7 feet of water and cast your lure to the bank or some type of shallow structure, you’ll probably do very well. Of course, there are several other factors that will make one area more or less productive than another.

On Toledo Bend and Sam Rayburn, there are several areas well known for producing large stringers in the early spring. The 1215 area on Toledo Bend is where I cut my bass-fishing “eye teeth”. When people speak of “1215”, this covers a vast expanse of water from the mouth of San Miguel Creek to where the old 1215 Hwy. comes into the water, better known as Blue Lake Landing. Here you’ll find flooded brush in up to 10 feet of water, laydowns by the thousands, several types of grass, drains and ditches running every which way through acres of flats, old roadbeds, humps surrounded by deep water … the list is never-ending.

When my husband and I first started fishing on Sam Rayburn, we thought it would be much the same as fishing on Toledo Bend. It’s amazing how these two lakes are so different! This is where I first learned about the technique of Carolina-rigging, which is a predominant method of catching largemouth bass on Rayburn. We have had good success in several areas on this lake, but none compare to Veach Basin in terms of consistency.

Like the 1215 area on Toledo Bend, Veach Basin offers a wide variety of “structure” that seems to attract and hold fish better than other areas. However, I’ve noticed that the proximity of deeper water … 15 feet or more … to shallow-water spawning areas seems to be the key to success here. There are several creeks in Veach that converge into what seems to be wide open water with little or no structure to hold fish. Here, long points go on for what seems like forever and create what may appear to the eye as unlikely spots for bass to spawn. However, what you can’t see is often right where those big buys are located. With a good chart recorder, you could easily be in “hawg heaven”!

However, this time of the year, I like to do much the same as I would on Toledo Bend … stay in 0-5 feet and cover lots of water, pitching to every bush I see. Like on T-Bend, I look for areas that have grass, but not necessarily thick grass. This is one thing that the two lakes do have in common … the bass’ general tendency to be where there is grass of some kind. One of the biggest differences between the two lakes is the color of lures I use.

On Toledo Bend, I lean toward black/blue and grape/purple-based plastics and chrome-based hard lures in the spring, whereas on Rayburn, it seems like plastics and hard baits in greens, browns, and gold or copper colors work better. Of course, Rat-L-Traps in varying shades of red are hot on both lakes … especially in the spring … so don’t leave home without them! Also, as I said before, confidence in a lure and your presentation will often encourage the strike, no matter what the color. In this case, I’d just make sure that I have varying sizes and shapes of lures in that favorite color.

If you see a white Champion 203 with green trim propelled by a 225 Mercury EFI, with a woman behind the wheel, be sure to wave. I hope to see you on the water soon, because a bad day on the water is better than a good day at work! God bless and good fishing!