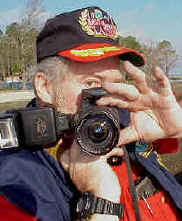 The Calico’s of Palo Gauch

Several “blips” on the depth recorder mark fish holding over a 23′ creek point ridge with the edges dropping off into a 32′ creek-channel, distinct upside down Christmas tree patterns designate the fish as possibly being crappie. “One sure-fire way to find out what they are, advised the attractive young lady at the helm of the sleek Skeeter bass boat, would be to drop a line, or two, to see just what they are. And it doesn’t take much more coaxing before two lines were dropping live minnows down to the recorded marks of the fish, taking only seconds before the true nature of those electronic blips were finally verified………..”Crappie”,…. nice, girthy chunks that mark them as Palo Gaucho Crappie.

On this warm “Indian Summer” day of December, with Autumn bursting out all over with brilliant hues of gold’s and crimsons, this writer/angler was delighted to be fishing with the owner/operators of Harborlight Marina. Located within the protective sloughs and coves of Palo Gaucho Creek, the peninsula facility sits in the mid-lake area on the Texas side of Pendleton Bridge. Palo Gaucho has become a true friend to fishermen who dream of year-round fishing for the black bass species of Largemouth and Kentucky bass, bar-fish-(yellow bass)-catfish, white bass, striper, bream-(some of the best and largest bluegill & chinquapin perch found anywhere)-as well as crappie of both the black and white species which have become the #1 attraction for most visiting anglers.

“Our biggest asset is our location, informs Harborlight owner/proprietor, Richard Walker, “Which offers excellent crappie fishing opportunities mainly because of the huge variety of good fish holding structures. “Yes, the structure here is very conducive for supporting all of our fish life, Charlene Mahaffey supports to her dads earlier remarks, “Which has a myriad of stump-flats, creek lay-downs, buck-brush, rock bluffs, bridge pilings, boat docks & piers, which are abundant within the many coves, sloughs, bays, and creek-channel inlets that make up the Palo Gaucho Creek area.

After catching another nice crappie of about 12 inches, Charlene quickly maneuvered the Skeeter for mooring up to some nearby stumps, and then re-positions us directly over the crappie, which is bunched up around a ridgeline brush top. We all grab at least two fishing poles each and prepare to “spider-fish” the school of crappie which are holding directly below the boat. This involves dropping several lines down to different depths of where the crappie are suspended around the brushtop that is holding 23′ down on the ridge-top, which has a brush-top rising up to within 16′ of the surface. Charlene chooses to drop her baits down to the 18′ level, as Richard sets his lines near the bottom at 20′. My option has me hand-stripping to the 14′-to-15′ depths. Since the crappie always feed up, instead of down, the trick is to set your baits at least 1′ above the active feeders to attract their bites. Setting our baits at different levels will tell us where the larger, more active crappie are holding, and it’s not long in coming as Charlene boats another “keeper” crappie of about 13 inches which has Richard and I re-setting our baits to the 18′ mark.

“We have a 10” crappie size limit here on the Texas side of Toledo Bend, Richard alerts, “With a 25 fish per day creel limit. “We also have a Winter-ized size limit innacted now between December and February, Charlene advises, explaining that increases your creel to the first “50” fish caught by each angler with a “no-size” limit. “Otherwise, Richard clarified, “No crappie during the months of December/January/February are allowed to be thrown back. “This is due to the high mortality rate of the crappie that are caught from the deeper colder waters, that if were thrown back as being too small, would not survive the deepwater release. (Check with TP&W rules and regs)

“Springtime will find our crappie moving in from their wintering depths to the back of the Palo Gaucho creeks and sloughs, Richard informs, “Where they’ll start migrating to their spawning areas. “This could happen as early as February, Richard advised, stating that it really depended on the water temperatures. “Yeah, Charlene added, “When the surface temp starts hovering in the 60’s the crappie will start moving to their beds “en-masse” as this is when we’ll start seeing our larger “mega-slabs” that may weigh around 3 lbs, or better, with some going over the 4 lb mark. “Although our lake has a 3.69 lb black crappie record, Richard notes, “We’ve had many “saddle-blanket” crappie that were much heavier but were not turned in for official records. “This is a shame, Richard grits, “Since this lake has produced many 4 lb -plus- “monster” crappie which ended up as a supper table item rather than on the record books.

“Summer is also a good fishing period for Palo Gaucho crappie, Charlene informs, “When they start stacking up along the bridge pilings and deepwater timber structure. “Night fishing becomes the key factor for success here, Richard advised, “As fishing under brilliant stars, or the golden beams of a full moon, can produce some “heavenly” crappie catches. “Plus the added enhancements of the night-fishing sounds from yelping coyotes, hooting owls, and night feeding fish splashing around you can excite even the most bored of anglers into having fun. “Yep, Charlene added to her sound-bite, like when dad and I sauntered off the other night from the Marina and just had a ball catching fish and listening to the night sounds. “Yeah, Richard supported with a big grin, “No radios, no electronic video games, and no television, just pure nature at its absolute best.

“A lot of people know about, and fish in the more popular wintering crappie areas such as “The Chicken-Coop”, Richard pointed out, “But, that means fishing in an open lake area surrounded by dozens upon dozens of other boats, “While here, in the Palo Gaucho area, we have great expanses of some excellent crappie fishing waters which are more protected, and easily accessible to just about all types of boats, from the sportier kayaks or canoe’s, to the deck or pontoon boats, to the bass-rigs or large bay boats. “Our facility has an easy access boat-ramp with dockside gas, full R.V. hookups, cable TV, motel units, and new waterfront cabins, as well as a full service bait, tackle, and grocery store with a large meeting room for those family or company get-togethers.

“We are a family oriented Marina/Campground, Richard informs, “And we take our responsibility of providing a safe and healthy atmosphere for our year-round customers very seriously. “The Family and Kids are our absolute joy, Charlene advised, “As Harborlight, and Palo Gaucho can provide a youthful and FUN-TIME adventure for all ages, whether it be fishing for crappie, bass, striper, white bass, bar-fish, catfish, bream, or just lazily strolling along the edges of our beautiful shorelines to enjoy sightings of eagles, hawks, egrets, pelicans, or the multitude of other wildlife which abound here on a year-round basis. “We’re centrally located on Hwy 3121, near the Texas side of the Pendleton Bridge just east of Hemphill, TX, where shopping is only a short 15 minute drive to town.

“This is our Winter season now, Richard advises to my amazement as we sit over stilled waters under azure blue skies in shirtsleeves warming from an East Texas sun which is caressing our smiles. “This is absolutely beautiful, I admire to them after viewing our surrounding shoreline vista, which is in full bloom from the magic of Autumn. This reminds me of that popular advertisement which states, “Folks, it just don’t get no better than this””But, as all three of us continue to catch some nice “chunky” Palo Gaucho Calico’s from the edges of some ridgeline timber, my personal response to that popular cliché is………………….. “Oh yea it doo”

As my time for enjoying the fine company of this father/daughter fishing team ebbs, my promise of returning to Palo Gaucho for some late Spring calico action is scheduled for next April……for scheduling your “year-round” fishing adventure contact Harborlight Marina at (1-800-222-0547)- or clic to- <www.sabinenet.com/harborlight> or e-mail your interest to <[email protected]> 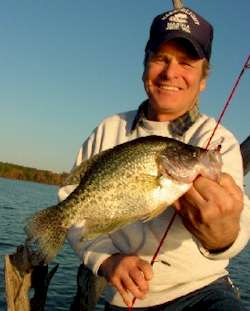 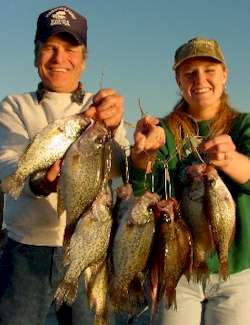 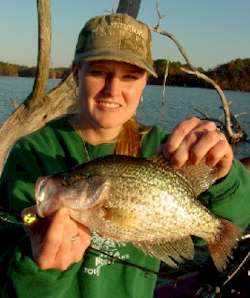 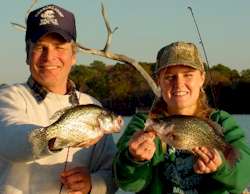