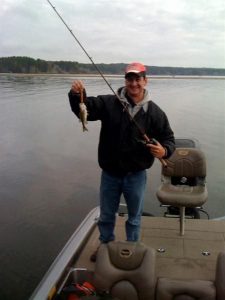 What was this bass thinking?       100410001
Douglas McClung of Gramercy, LA      March 23, 2010
AREA: Indian Mounds   BAIT: Rogue
My good friend, Lionel Deslattes, and I make an annual trip to Toledo Bend. Every year we seem to catch a least one bass that is smaller than the bait. We always wonder what the bass was thinking when it took the bait. I guess its let me catch it first then I will decide on how to eat it. 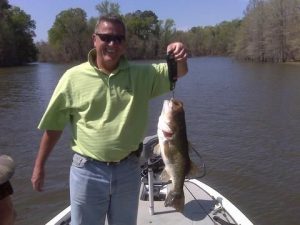 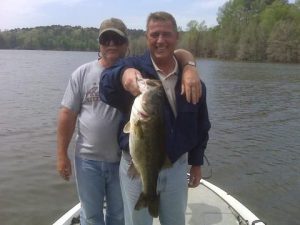 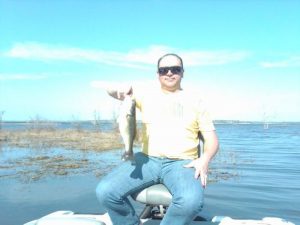 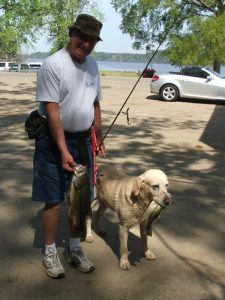 While fishing off the bank at Holly Park with and ultra lite spinning reel, 4lb test line and a small topwater pop-r., we managed to encourage a 3 lb large mouth in to taking the bait.

The fish headed for the moss bed and became entangled a good 20 yds out. Scotch watched the whole ordeal. The fish was hung in the moss with just its tail protruding. I lined Scotch up and sent him out. He crossed the channel , grabbed the fish and returned her to the bank.

Scotch has proven himself in the field on birds, pheasants, ducks, geese, grouse, quail, and dove. He also retrieved a shot squirrel, which is strange, since he has been trained not to chase rabbits. Today he brought home supper,a 3 lb bass.

I put it on a stringer and wanted to continue to fish, but he kept going in the water and bringing it back. So I let him take it on to the store and get his picture made and then on to the fish house to clean it. Tonight he and I will eat fish.

Scotch has been with me teaching physics,chemistry, biology and shop in three states, Texas, Nebraska and Nevada. By Dennis Higgs. Submitted through Holly Park Marina. 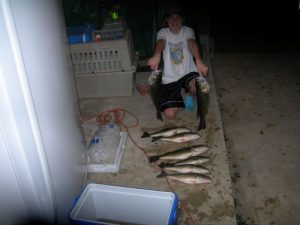 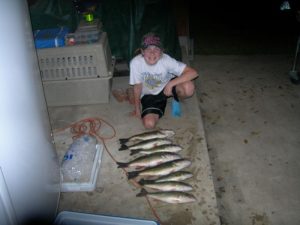 Other than her catching a good fish, the excitement of the day came when a rod and reel fell into the water and I took a plunge over the side of the boat to get it. I failed to realize the shiner bucket (styrofoam) was below me and when I dropped over the edge of the boat to reach it I landed on the bucket. I also managed to not catch the rod and reel. All total, I am minus a perch jerking rod and reel and a shiner bucket. It was one of the best days of fishing I have ever had on the lake.