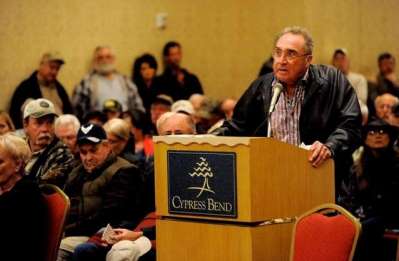 Joe Palermo speaks during a Sabine River Authority special board meeting at Cypress Bend Resort on Toledo Bend on Thursday evening. The board voted not to pursue water sales to Texas until a comprehensive statewide water study is done. / Val Horvath Davidson/The Times

TOLEDO BEND — To the delight of about 300 people gathered Thursday night in the Cypress Bend Resort conference center, the Sabine River Authority voted to suspend out-of-state water sales until a comprehensive water plan for Louisiana has been developed.

Growing opposition to the contract with TB Partners that would send water from Toledo Bend Reservoir to Texas is one of the reasons Executive Director Jim Pratt cited in his recommendation to board commissioners. Their subsequent vote was unanimous and met with applause, whoops of joy, and a few offered a hearty “Amen.”

And once again, the involvement of residents gets the credit for influencing critical SRA decision-making.

The last time so many became engaged in the process was about eight years ago when the lake level issue rallied residents and ultimately forced implementation of a state law that stops hydroelectric power generation when the reservoir reaches a certain level.

“This speaks volumes,” state Sen. Gerald Long said to the crowd after the board vote.

Long also volunteered that he has had numerous conversation with Gov. Bobby Jindal — whose signature would have been required before water could have crossed the state line — about the matter.

And today, Long who this year will chair the Senate’s Natural Resources Committee, said he would instruct his staff to create a joint House and Senate concurrent resolution to ask state officials to conduct a comprehensive analysis of all surface and ground waters and how best to manage them “for generations to come.”

Louisiana is one of nine states without a master plan to manage its water assets, he said, adding, “If citizens had not done this to create this interest, we would not have been coming up with this plan.”

Talk of trading hydroelectric power generation for water sales has been ongoing for almost eight years. Selling water year-round rather than sending it through generators at greater volumes over six months is preferred because it would lessen the impact on the lake level.

No large-scale water supply markets were developed in Louisiana beyond the water systems, municipalities and industrial customers already served. But interest in providing water to parts of Texas has popped up periodically, with one serious inquiry in 2004.

Nothing ever materialized until last year when TB Partners approached the SRA with a proposal. The Water Sales Committee and entire board voted discussed it at several public meetings, none of which was highly attended by residents.

The contract was put on hold in August, however, when the governor’s office said no contract would be considered without the opportunity for any other interested companies to submit proposals.

None did, so in November the Water Sales Committee again approved TB Partners’ contract, which by that time had been sweetened. Millions of dollars could be realized annually through the proposal.

But by this time individuals, resident-led groups and public officials were paying more attention and began dissecting the plan.

The impact on lake level was the overriding concern among hundreds of written comments submitted to the SRA last week. Length of the 99-year contract, lack of a drought contingency, desire to keep the water for Louisiana residents, decreased property values and where the water sales revenue would be spent were other worries.

Pratt acknowledged in his opening remarks Thursday the persistent drought condition that began in late 2010 joined public opposition and a nonexistent state water management plan entered into his and the staff’s recommendation to stop further water sales talks.

TB Partners spokesman Shawn Rosenzweig agreed with Pratt’s assertions and took a few minutes to dispel some inaccuracies floating throughout the community.

“We believed the move from power generation to water sales would ultimately benefit all stakeholders, but we also believe more time is warranted to study these project challenges and solutions,” Rosenzweig said.

About a dozen residents still spoke during a public comment period even after the vote was taken. Most, like Sharon Miller, offered gratitude for the decision. “Since y’all tabled it for further study, you can’t believe how happy I am.”

Others like Joe Palermo were critical and blamed “good ol’ boy Louisiana politics” for behind-the-scenes involvement in crafting the contract, which he felt wasn’t beneficial to Louisiana’s residents and would only fatten investors’ pockets.

Sonny Mason, of Sabine Parish, said, “Thank y’all for not giving up on Louisiana. Because that’s what y’all would have been doing is selling us out.”

Steve McMann, another lake dweller, was concerned about committing water sales for 100 years. He shared his experiences of living 35 years ago in Colorado, where water is supplied to California.

“We could find ourselves in that situation in Louisiana if we commit water that long,” he said. “It’s a good idea to study the long-term effect.”

The only one speaking in favor of the SRA was Sabine Parish businesswoman Gloria Thomas, who spoke directly to the crowd and challenged everyone to “keep an open mind.” She conceded her first reaction upon hearing about the proposed water sales was to say no.

But she and others over the past few months have studied the issue and find that water models indicate water sales will reduce the reservoir’s fluctuation and thus be more beneficial to those who live on its shores and depend upon it for a living.

“This will be a good thing for Toledo Bend if this goes through,” she said.