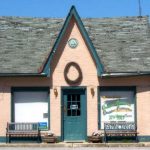 Beginning at the Square’s North Side – On the comer of Rusk and Court is the Cities Service Station built in the 1930’s. Gasoline was 13 cents a gallon! It now houses the Chamber of Commerce and Visitor Center. 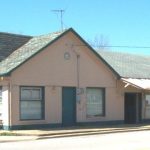 Just around the corner facing Rusk Street, is Denver Reed’s Barber Shop. If you are looking for a “standard” haircut, this is the place!

Next to the Visitor Center is Pace Pharmacy which was originally Syler’s Rexall Store founded by Felix Syler. Mr. Syler was the first teacher at the Male and Female College now located on the East side of the Square. 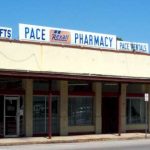 Just a couple of steps from Pace’s stands the Historical Marker dedicated to Capt. William Blewett. He came to Texas from Georgia in 1849 and made Newton his home in 1858. He was a surveyor by trade. At this site stood Blewett & Adams Mercantile Company, Newton’s first store. 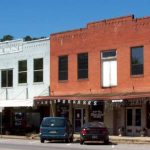 Further down the block was the Old Hardy Building, a one story wooden structure and in 1906 became the site of the Newton County Bank, the first bank in Newton. The 1914 chartered Newton County State Bank was next. The First National Bank of Newton, which was chartered in 1926, now stands at the corner of Rusk and Main.

In 1999, Newton Bank (a branch of Mauriceville National Bank) became the second bank in town and is located at Rusk and Magnolia

Newton’s depot was built in 1905 when the Orange and Northwestern train ran from Orange to Newton. The depot contained two waiting rooms each with a potbellied heater. They burned coal instead of wood. The railroad company would send a coal car to Newton before each winter just to keep the heaters in coal. In 1918 the line ran to Wiergate. The railroad was discontinued in 1963. 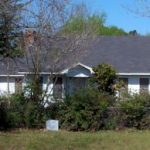 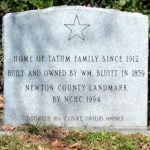 Just around the corner on High Street you will find the Tatum House, which was built in 1859 by Capt. Blewett. It was the second home to be built in Newton but was the first framed structure. In 1870 two men shot and killed Simon Gray. One man was cornered and killed under this house by some of Gray’s friends. The other killer managed to escape and left the country. H. P. Tatum purchased the house in 1912. It is the oldest standing building in Newton.

At the corner of High and Rusk you can see the Newton County News office to your right. Newton has had a number of newspapers over the years. The earliest record of one being published was The Newton News in 1904. Later there was the Newton Independent, The Cut Over Land Farmer, and The Newton Harold run by N. 0. Burnaman The current Newton County News has been servicing the community since 1969 and run by Glen Mitchell and family.

Cross Rusk and continue on High Street. To the left is the Newton County Public Library. The first library was located on the North side of the square. It moved to this site in 1989 and is part of the Howard Civic Center. The library holds a collection of approximately 17,000 books, audios, and videos. It has two Internet access terminals for public use.

Across the street from the Library is the Pete Hughes Memorial Park. Note the park’s rock ditch. It is one of several WPA structures built in the 1930’s during the Great Depression. Many Newton County men found work because of these construction projects. The towers at the old football park (now Woods’ Park) and other rock structures throughout Newton County were all built because of the WPA Project.

Take a right at Houston Street to visit the Iris and Anne Howard Community Center which houses Newton’s History Center, Museum and Genealogical Library. This is a “must see”! On the other corner of Houston and Court is The Blue House, known for serving delicious homemade soup, cornbread and desserts – but just on Tuesdays, November through February. 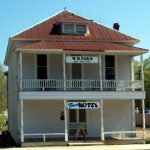 Go right to the intersection of Court and Rusk. Take crosswalk to view the East Side of the Square. Over the years many businesses have occupied this side – the telephone office. Bacon Law Offices, Williams Timber Company, Force Abstract Office (now located on the north I side), Newton County State Bank, an ice-cream parlor, pool hall, Westbrook’s Grocery just to name a few. Now there is A.W. Davis Law Offices, Powell Hotel and the The First National Bank.

The Powell Hotel was originally the W. H. Ford Male and Female College. It was located at the site of the old high school on east Main Street. The college was chartered in 1889. Two stairways led from the entrance to the second entry – the one on the right was for the boys and the one on the left for the girls. The large room on the first floor was for younger and less advanced students. The upper floor was for the more progressive students and the auditorium. It was sold in 1908 and moved to its present site. In 1954, Mr. and Mrs. J. D. Powell bought it and used it as a hotel. The Powell family donated it to the History Center in 1999. The hotel is now being refurbished through donations from Newton’s community: businesses, organizations, senior citizens and children have given their money, time and talent to restore this historical structure.

Located across the street from the First National Bank where Linda’s Deli is now located, stood a large two-story white building that was the Old Post Office. Marvin Booker was the postmaster for many years. After the post office moved, many other businesses occupied the building, one being the Reed Barber Shop. The upstairs housed the Masonic Lodge and Eastern Star organizations. The building burned in March, 1982. Just around the comer is Glenda’s Boutique & Tea Room in the old Nick Fletcher Variety Store building. Further down is the Didrikson Appliance Store which now houses Love’s Flowers, Gifts and Antiques.

Crossing over to the South side of the square is Bill Martin Law Office and one of Newton’s newest businesses. Diamond G Design. Collin’s Plymouth dealership, Fain Theater, Smith Jewelry, Gray’s General Merchandise Co., Fortenberry’s Insurance and even a saloon in the 1800’s were on this side. At the end of the block is Humphreys Hotel which has witnessed much of Newton’s history. Originally, it was a one-story home owned by the Pierce Fuller family Sheriff Dave Humphreys’ widow later turned H into a boarding house and hotel. (The sheriff was killed in 1932 during an attempted jail break.) Mrs. Humphreys had a second story built on. She served meals on a round table to travelers who had come to Newton by train. She ran the hotel until 1952. It is now being restored.

Crossing to the West side is the site of Newton’s first house. It was built by Major John Moore in the 1850’s. Until the courthouse was erected, it is said the Major (also the County Clerk) kept the county records in a tent in his yard. Some of the court records were in a box attached to a tree! In the past, this side has seen Dr. Hall’s Drug Store, a movie theater. Griffin’s Pharmacy, and Ed Miller’s Barber Shop. Still on location are Rydman’s Hardware, Phillips 66 and the Barrow Insurance Building. At the corner of Kaufman and Court is another of Newton’s new businesses – The Art Forum.

Over the years an ice plant, livery stable, box factory, veneer products,variety stores, dress shops, beauty parlors, grocery stores, and auto dealerships have surrounded the Courthouse Square. Everything from dry goods to coffins to farm implements have been sold on the Square! In fact, it seems Dr. Trotti has had a dentist office on the second floor of almost every building in Newton!

(For more detailed Information about the courthouse and Newton, be sure to visit the History Center and Museum. Also, Glimpses of Newton County History, Newton Nuggets, and Crosscuts are three books that hold a wealth of Newton history. They can be purchased at the Museum.