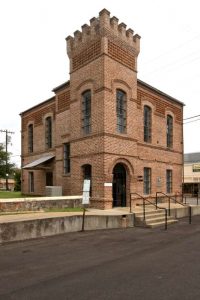 Used as Sabine County’s jail until 1983, the old jail house located on the square of Hemphill offers much history. The building is now known as the Sabine County Jail Museum and Virgie Speights Memorial Library. The facility has been under the direction of the Sabine County Historical Commission since 1987.

Built in 1903 at a cost of $8,800 the jail not only housed Sabine County prisoners, but the facility also held prisoners from other counties that either didn’t have a jail or had a full house.

There were two hangings at the jail – the first in 1909. The first hanging was a public event and was held outside the jail even though the jail is outfitted with a hangman’s noose and trapdoor inside. The museum houses a piece of rope used in the first hanging. 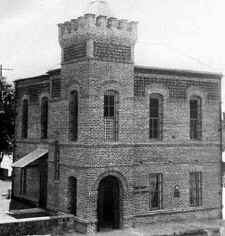 The second hanging, which was held in 1922, was done inside the jail. This was the only time the hanging rope and the trapdoor were used as hanging was outlawed in 1924. There are only two jails in Texas that had a hanging rope.

The museum also houses many interesting exhibits of Sabine County history and the library in the museum has some very rare books in this collection as well as a good amount of genealogy materials.  Click here to see the Old County Jail Museum.

The museum is operated under the auspices of the Sabine County Historical Society and open to the public.   Virtually all of the history of Sabine County is represented in the various items in the museum.  The attendant happily takes the time to tell you about any little item that sparks your curiosity and gives you the guided tour of the jail cells and gallows, too.  Admission is free; you may leave a donation if you wish.