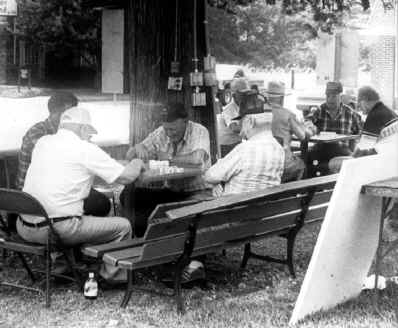 Playing dominoes under “The Cedar Tree” in Courthouse Square

Serving as the county seat of Sabine County, Hemphill is the type of small “hometown” that is filled with happy memories.

On any given day men can be found playing dominoes (picture at bottom of page) and “42” under “The Cedar Tree” which is located on the lawn of the courthouse square. This is a friendly tradition that certainly is not seen in larger towns and cities.

A visit to Hemphill’s town square with its home owned businesses gives visitors a unique sense experiencing small town life. A bit of nostalgia can be found by a visit to K-C Drug Store, which still continues the use of a real old fashioned soda fountain. The business was founded in 1927 and has always been located on the east side of the square. They made only one move in 1928 at which time the soda fountain was installed.

Hemphill came into existence (named after Supreme Court Justice John Hemphill) as the result of an election held in 1858 in favor of a more centrally located county seat of Sabine County.

The townsite was laid out by E. P. Beddoe, and is located on the southeast part of a survey granted to Joseph Walker by Mexico on October 13, 1835. The townsite was located on an 80 acre tract owned by Richard Slaughter and his wife, Annie Slaughter, and conveyed by them to Sabine County probably during the early part of 1859. The original deed records of the county were destroyed by fire in 1875. 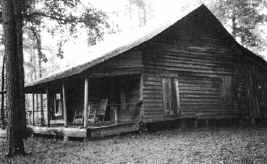 Gus Beckcom house, constructed late 1800’s – tradition is that the house was used as the county jail during the 1890s. The house is now located off the Springhill Road about 3 miles west of Hemphill – photo 1992

On January 23, 1882, Richard and Annie Slaughter (then living in Kaufman County) executed a substitute deed conveying again to Sabine County the original 80 acres of land, and reserving for themselves certain lots in the survey which were reserved in the original deed. The substitute deed is now filed on page 19, Volume F of the deed records maintained in the county clerk’s office at Hemphill.

Some of the pioneer merchants who established businesses in Hemphill during the early days of the town are shown below. This list, no doubt, is incomplete, and the years of establishment cannot be fixed with certainty; however, most began business sometime during the period from 1855 to 1883.

Sabine Valley University was established in Hemphill on June 7, 1879; however, it is not known how long the school existed. It was located on a thirty acre tract directly across the highway from the present Starr Funeral Home. Later (during 1910), the university land was deeded to the Hemphill Common School District No. 1. 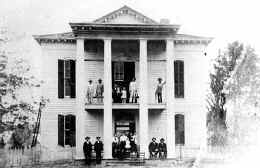 Williams Hotel, circa 1908. Tradition is that the front was part of the 1877 courthouse. The hotel was destroyed by fire in 1918 and rebuilt at a new location.

Hemphill Common School District No. 1 was established during the latter part of the last century, but the exact date could not be ascertained. There is, however,  a picture of the Hemphill one-teacher school, with John W. Minton shown as the teacher. This school was located near where the First United Methodist Church stands today. This photograph was made in 1899. Later, probably around 1910, a two story brick school building was constructed with its location in the general area where the present Hemphill school stands. Brick used in the construction was provided locally by Henry Huffman who operated a brick kiln.

The city owns and operates the D. G. Mann Municipal Park which has excellent sports facilities including tennis and volleyball courts and picnic areas. The park is composed of 27 acres of land donated to the city in 1973 by Dr. D. G. Mann and the Pratt families. Dr. Mann was a longtime dentist in Hemphill as well as serving as city mayor for many years.

In addition to being the seat of county government, several state agencies either maintain offices in Hemphill, or have representatives working from a Hemphill base. The Yellowpine Ranger District of Sabine National Forest as well as the Hemphill Independent School District schools are located here. Hemphill also serves as the northern and western gateway to the lake communities and recreational areas lying along the western perimeter of Toledo Bend Lake. The population today is about 1,400.

The city no longer possesses the original townsite plat probably made in 1859. The oldest survey on file in the city is a Survey Map, Hemphill, The County Seat of Sabine County, Texas. This map is signed by W. E. Payne, state licensed surveyor, under the date of January 16, 1920.

Organized banking services under federal and state regulations began in Hemphill on January 29, 1907, with the chartering of the First National Bank. State Guaranty Bank (name changed to Hemphill State Bank later) was chartered on January 9, 1917, and Farmers & Merchants State Bank (later merged into the State Guaranty Bank), opened on October 20, 1920. These banks closed at the onset of the Depression in the early 1930s. The present First State Bank was opened on September 9, 1944.