Reprint Courtesy of the Fort Worth Star-Telegram

By JESSIE MILLIGAN
Fort Worth Star-Telegram 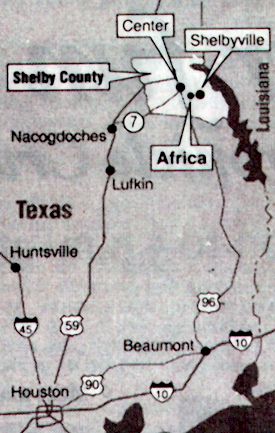 AFRICA – Mist floats among the pine boughs on cloudy days in Africa , Texas, a poor, rural unincorporated community tucked in the state’s eastern Piney Woods. Even the town’s history and name are foggy, and, like the mist, are likely to disappear.

“The young ones, they don’t even call it Africa anymore,” says Addie B. Clifton, 88, a woman born here and reared with nine siblings in a four-room house of not much more than 600 square feet.

“They are going to lose all memory of it. And that’s so sad,” Clifton says.

Africa – also known as Webb, after an early property owner, or St. John’s, after Africa ‘s Baptist Church – is in deep East Texas by the Louisiana border, where the culture of the Deep South spreads across the state line like roots flourishing under the shade of the thick pine forests.

The town’s history is largely unwritten, its tales untold. Freed slaves with a dream of a new home founded Africa 135 years ago. But their stories settled into the deep thickets and finally disappeared.

About 75 people live in Africa , which is not much more or less than the population has ever been, Clifton says.

They drive into the nearby town of Center, population 4,950, to socialize or to work at the Bruce Hardwood Floors plant or at Wal-Mart or one of the other retail outlets, supplementing the money they make cutting timber.

On the way to Center, the folks from Africa will drive along Shelby County Road 2050 and onto Martin Luther King Drive, the road that used to be called Neuville Road. Some people still call it Neuville Road, even in phone book listings, because they were opposed to changing the name to MLK Drive.

“Some of the old (African-American) folks here just didn’t want to change it,” says Eddie Logan, 70, a deacon at St. John Baptist Church in Africa . “They just wanted things the same.”

Change has been slow to come to Africa and its environs, which have long been neutral ground.

In 1806, the region was declared a no-man’s land, where no one was supposed to live or lay claim to land until the United States and Spanish-ruled Texas could settle a border dispute. History books say most people passed through the area on their way to the open plains.

By 1819, the dispute was settled and the Sabine River was designated the boundary between Louisiana and Texas. Although it was legal again to live in the region, only a few planters were attracted to clear the forests.

When the Civil War ended in 1865, freed slaves established communities throughout the South. A few found their way to this place, started homes and farms, and named it Africa .

In Logan’s possession is a ledger that lists long-ago members of the church in Africa . The first entry in the book of now-crumbling pages is dated 1894. The Texas State Historical Association says the once-thriving farming and poultry-raising community consisted of a two-story town hall, a gristmill, a syrup mill and three stores.

Clifton attended school in Africa . The school building is abandoned now, just the tip of its tin roof poking out of the pines. Years ago, much of the land was cleared. But the fast-growing pines have grown thick, covering up remnants of a life that used to be.

Clifton recently brought a visitor back to her now-abandoned childhood home. The floors of the two bedrooms sag with the weight of the years.

“Addie, how did 10 children all fit in here?” the visitor asks.

The family grew just about everything they ate, Clifton said. They had no phones or televisions, just the church down the street. Her father ran a small store near the family home, mostly selling goods to children who attended the nearby school.

Clifton and her husband lived in Africa for many years, raising Black Angus cattle. She taught school and worked in a social-service program in Center.

The remains of old vacant buildings still stand, scattered among the pines. A few houses are here and there, a few mobile homes have been moved in. But there isn’t much else.

“They (the children reared here) just moved on to better things,” says Clifton, whose siblings live in Houston, Beaumont and Dallas.

And that may be because life on the unpaved roads in Africa , Texas, is unglamorous enough that it’s easiest just to forget it, to give it some new name, let the past erase itself.

Or perhaps it is easier to move far away to Dallas or Houston or any place where your parents didn’t have to keep weeding out those pesky yellow pines sprouting up in land that needed to be cleared just to raise enough to eat.

But the “old home place,” as Clifton calls the abandoned family home, is where the family still gathers once a summer for a reunion. About 200 people come back to Africa to celebrate. And then they leave the old house in the pines to sit there untouched for another year, a memorial to a time gone by.

Clyde Lister, 68, lives in Africa , as he has for about 30 years, but works in a mortuary in Center on Martin Luther King Drive. In the 1960s, during the civil-rights movement, Lister and Logan say they admired the road’s namesake, Martin Luther King Jr., and his work from a distance.

Logan recalls being asked by a friend to go to one of the protests and marches taking place in the South’s larger towns and cities. So does Lister.

“We had jobs and families to watch out for, so we just didn’t get involved,” Lister says.

The two say that back then, they worried about a backlash from the white community or from members of the black community who didn’t feel comfortable openly supporting King.

These days, though, they march.

“But the marches today are celebrations of King and his good work. They aren’t protests,” Logan said.

Although neither grew up in Africa , both married women who did.

Logan says it’s sad that there isn’t a written history of even the names of the people who first had a dream of Africa , Texas. Logan has the ledger from the church and some photographs, but he does not have the names of the first folks who came here. He doesn’t know where they lived before the Civil War.

He does know that the Goodwin and Goodwyn families were early settlers. But the church and the tombstones dating back to the 1890s hold the only clues to the names of those who came before.

And the stories of slavery and pre-slavery? Stories of ancestors’ memories of the real Africa ? Those are long buried.

One of the few reminders of Africa ‘s past is the bell in front of St. John Baptist Church. Long before the arrival of phones, its distinctive ring signaled a death in the community – first one pull, then a pause, then another pull.

Logan wants to gather enough history to put it on a plaque mounted near the bell. It could be a memorial to Africa’s founders, he said. Maybe someday. Logan went to the bell in Africa on New Year’s Eve and gave it a couple of slow rings.