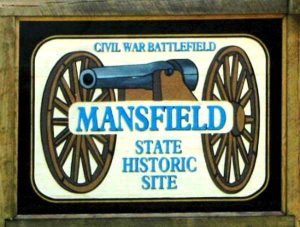 With the fall of Vicksburg and Port Hudson in July 1863, the Mississippi River was entirely controlled by the Union. President Lincoln and his staff decided that the capture of Texas would be the next objective in the trans-Mississippi area. The Red River was chosen as the best approach into Texas, and a navy-army advance was planned with the army (35,800 troops) under the command of General N. P. Banks and the navy under the command of Flag Officer D. D. Porter.

The Union surmised that a successful Red River campaign would accomplish several important goals: it would lead to the confiscation of cotton for New England mills and to the destruction of Confederate supply plants; it would prevent the French-Mexican force from joining Confederate forces and prevent supplies from reaching the Confederate troops; it would provide protection for the loyal Union population in Texas; and it would bring Texas back into the Union as a voting state. 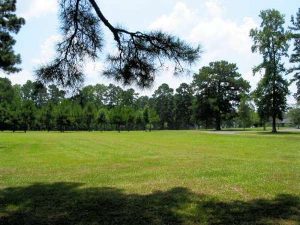 Outline of old fort on grounds

Following the course of the Red River, the Union army and navy progressed with little opposition through Alexandria and reached Natchitoches by early April 1864. At Natchitoches the army veered away from the Red River, going toward Shreveport by way of Mansfield, which left them without the support of the navy. This and other tactical blunders on the part of General Banks, as well as a series of successful maneuvers by Confederate commander General Richard Taylor (son of President Zachary Taylor), decisively influenced the final outcome of the battle.

The scene below shows some of the re-enactors that sometimes put on demonstrations at the park. 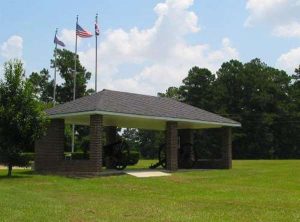 Like many important battles, the Mansfield-Pleasant Hill engagement was actually a series of encounters taking place over several days. After a two-hour cavalry fight with Union forces near Wilson’s Farm on April 7, 1864, General Taylor elected to defend a site, about four miles south of Mansfield, now the location of the state commemorative area. General Hanks did not expect the Confederates to fight until he reached Shreveport, so the Union army became stretched out along the narrow road leading to Mansfield. This allowed Taylor to deal with his opponents on more equal terms since the Confederate troops were heavily outnumbered.

At 12 p.m. on April 8, the head of the disorganized Union army (5,700 troops) was confronted by the Confederate army (8,800 troops) in battle formation. The Union troops quickly formed a line of battle along a rail fence and a ridge known as Honeycutt Hill. On orders from Taylor, General Alfred Mouton’s Divisjon charged the rail fence. Mouton was killed leading the attack, but French born General C. J. Polignac, along with other Confederate forces, continued the attack and overwhelmed the Union line.

A fresh unit of 1,700 Union troops formed another line of battle about a mile south of the first. After a brief encounter, Taylor and the Confederates routed the Union forces, taking many prisoners and seizing guns, small arms and wagons abandoned by the fleeing soldiers.

The Battle of Pleasant Hill 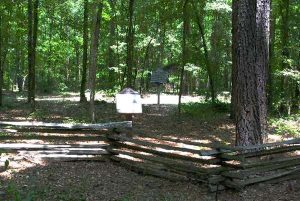 Union positions were behind this recreated fence

(You may wish to check the Battle of Pleasant Hill Re-enactment – CLICK HERE)
Two miles south of the second line, another 6,000 Union troops formed a defensive position at Chapman’s Bayou and held this location until dark. During the night the defeated Union forces fell back to Pleasant Hill. On April 9, the fierce Battle of Pleasant Hill was fought, with both sides taking heavy losses and withdrawing from the field after dark.

The Union army rejoined the navy in Natchitochcs and began a long retreat down the Red River. The river had dropped to an unusually low level, trapping the navy in a series of rapids near Alexandria. Union engineer Joseph Bailey solved the problem by having wing-dams built in the river to raise the water level. The navy finally floated free and the combined Union forces left Alexandria. Confederates opposed the Union retreat first at Mansura and then at Yellow Bayou. 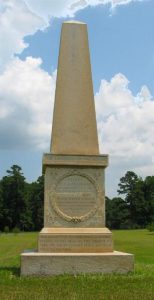 Picture at Left: Insrciption on monument:

The Lafayette of the South

Twice promoted for gallantry on the fields of Richmond, KY and Mansfield, LA
C.S.A.

Here Gen. Mouton fell. Here Prince de Polignac sprang to the head of the troops to take the fallen leader’s place and bear them to victory.

On May 18, 1864, the Union forces crossed the Atchafalaya River, ending the disastrous Red River campaign. By turning back these large Union forces, the Confederates were able to prevent complete Union control of Louisiana and stop progression of the war into Texas. In fact, the Confederate victory at Mansfield may have prolonged the war by several months.

Step Back in Time

Through living history events, exhibits, battle reenactments and interpretive programs, Mansfield State Commemorative Area allows you to travel back to the unrest of the Civil War years. Interpretive trails and a picnic area will make your stay memorable and pleasant. Watch for musket demonstrations, candlelight tours of the battlefield and other exciting events scheduled throughout the year.