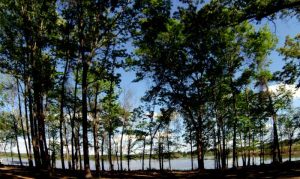 Clyde’s Crossing is a small park located on Hwy 191 across the road from Rebecca’s Convenience Store just northwest of Zwolle. There will be a kiosk sign developed there as well as a fishing pier.

Clyde Crossing park is a 2 1/2 acre tract of land, located on Hwy 191 and is owned by the Sabine River Authority. This park commemorates the actual historical site of Clyde with its early years of trading goods and communication with the west. Today, the only remains is an old cemetery located at the actual site of “Clyde’s Crossing”.

In the early days, freighting was done in this area chiefly by ox wagons that met the Texas and Pacific railroad crossings. In 1881, William Martin Webb opened a trading post at this location, which later became a U. S. Post Office with Webb serving as the first post master. The establishment of an East-West mail route was so momentous that the popularity and influence of Mr. & Mrs. Webb and their trading post grew rapidly. Clyde just happened to be the name of the Webb’s son. Continued growth in railroad freighting, brought exciting news that Kansas City Southern railroad was going to build a passage from Shreveport to the Gulf and was looking for vintage points along the way. Clyde was tentatively selected for the site, but things did not materialize due to land developers donating land that later became the town of Zwolle.