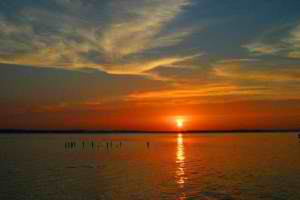 Toledo Bend Lake is located on the Sabine River.

Beginning in May 1963, land acquisitions for Toledo Bend Reservoir started as a joint management project of Texas and Louisiana River Authorities. The construction of the dam, spillway and power plant was initiated in April 1964. The closure section of the earthen embankment and impoundment of water was begun in October 1966. The power plant was completed and began operating in the early part of 1969.

Toledo Bend Reservoir forms a portion of the boundary between the states of Texas and Louisiana. From the dam site, which is north of Burkeville, TX, the reservoir extends up the river for about 65 miles to Logansport, LA, and inundates land in Sabine, Shelby, Panola and Newton Counties, Texas, and Sabine and DeSoto Parishes, Louisiana.

Toledo Bend Reservoir is the largest man made body of water in the south and the fifth largest in surface acres in the United States, with water normally covering an area of about 200,000 acres and having a controlled storage capacity of 4,477,000 acre-feet (1,458,934,927,000 gallons). It is the nation’s only public water conservation and hydroelectric power project to be undertaken without federal participation in its permanent financing.

Toledo Bend, with its 1,200 miles of shoreline, offers an almost unlimited opportunity for recreational development and is a major element in serving the growing demand for water oriented outdoor recreation. Both private and public facilities are available for swimming, boating, picnicking, fishing, camping, hunting and sightseeing.

The lake has a large area of submerged timbers, which serves as the fishes prime habitat. Black bass, crappie, blue gill, feisty striped bass and catfish are found in abundance in the lake. Guided fishing trips can be booked through many of the local marinas.

A population of 300 pounds of game fish per acre and an annual fingerling restocking program make Toledo Bend one of the best fishing lakes in the country with an abundance of black bass, white bass, stripers, Florida bass, crappie, bream and catfish. 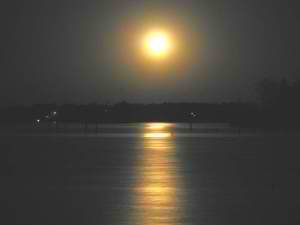 Lake record catches include 14 pound for bass and just under 5 pounds for crappie. Stripers can run up to 40 pounds in size and bream fishing is great for kids because they are easy to catch and the action is fast.

Along the timbered shoreline are marinas, lakeside cottages and fine luxury homes. There is a natural harmony with the woods, the land and the water. Throughout the region, nature’s abundance of wild flowers, scented blooms, majestic pines and leafy shade trees all erupt in fountains of color. Yet, there is a blend in the mysterious, almost primitive shallow bayous and coves that make up the shoreline.

Many people who once visited Toledo Bend are now residents of  areas bordering the lake in Texas and Louisiana.