– Unfortunately, Catfish Jim is no longer with us, but is well remembered – 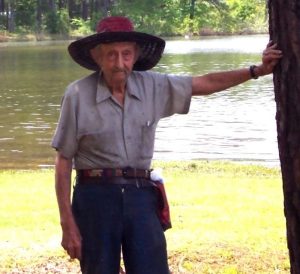 I think one of the most clever and unique individuals I ever met was “Catfish Jim”. Unfortunately, he’s gone now and is missed by many people who knew this modest and charming character.

Jim lived on Highway 191 not far from Pirates Cove Marina and frequently launched out of Pirates Cove to run his trot lines. I believe it is fair to say that Jim had forgotten more about cat fishing than most people would ever know. Many people would stop by his place to purchase catfish; they were available live or as filets.

Always pleasant and friendly to speak with, Jim was also quite a character! Along with his cat fishing, he also spent time almost daily checking out the area dump for items that were still useful even though they had been discarded. He had mountains of these “found items” in his yard. He was quick to offer items to others who needed something – and had quite a stock to pick from! 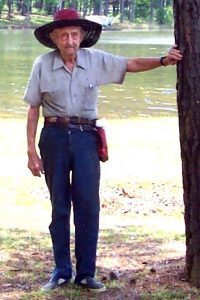 Jim put his catches in tanks at his home to keep them alive; some he filleted. His tank system was completely made from found items and was as ingenious and inventive as it was unique. Several tanks were linked together in such a manner so the water could pass from one to another to keep a flow in the tanks and keep then cleaner. A series of toilet tank float balls and a small pump managed the flow and tank levels. An incredible array of switches controlled the electric supply to them and he even had old car batteries as a backup power system for the tanks in the even of a power outage; insufficient water flow would kill the live fish.

When raccoons became a problem – they found fishing at Jim’s tanks pretty easy – he devised a system to keep them away. He had some triggers set up and the raccoons would trip them which, in turn, would switch on a radio and some flashing lights to persuade the coons they should leave!

Jim’s boat was an absolute wonder of apparent clutter – but everything has its place and purpose. Naturally, he had a number of old boats around, but the one he used most was rigged with everything “custom made” to his needs from an incomprehensible array of items. He had built live wells and aerators into this hoary craft and had switches all over it for various purposes; an engineer would have gone nuts trying to figure it all out, but it worked great for Jim! His boat was rigged to most efficiently check and bait his trot lines and store the fish from them as well as make quick repairs to the hooks. Everything necessary for rain, shine, dark of night, break downs and trot lining was part and parcel of his rig.

Most of all, Catfish Jim was a truly special guy that lived his own way, never seemed to be in too much of a hurry, and always was nice to everyone he met. I’m sure there are others who miss him; the loss of someone so unique is a loss to us all. It was a privilege to know him.