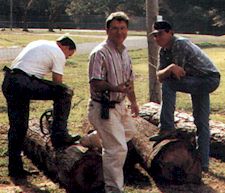 This festival commemorates the time when the area was a Free State (1806-1822), located between Spanish land and the United States. This festival has a comedy of shoot-out skits (Free State Gang vs. The Law), trail rides, street dances, lots of food and authentic syrup making, lye soap making, and an operational grist mill. Held each November in Florien, La. Contact Margaret Nixon (318) 586-3521.

The Sabine Neutral Strip Historical Foundation and the Sabine Freestate Festival were organized to commemorate the great historical events leading to the establishment and termination of the “neutral ground” between the territory of the United States and the territory of his Catholic Majesty (Spain) west of the Mississippi River.

Events leading to the territorial dispute resulting in the “neutral ground” agreement really began with the French establishment of its westernmost settlement and fort in Louisiana at Natchitoches and the eastern terminus of El Camino Real (San Antonio Trace) at Los Adaes just east of the present town of Robeline. It is generally conceded by most historians that the actual boundary between the two powers in Louisiana was on the Rio Hondo, a small tributary flowing between present day Natchitoches and Robeline.

By the treaty of Fontainbleau of 1762. France ceded its Louisiana territory west of the Mississippi to Spain thereby establishing Spanish jurisdiction from Los Adaes eastward to the Mississippi River. Spain held possession of this territory until 1801 when it agreed, in a secret treaty, to cede the territory back to the French Republic. The document “ceded to the French Republic, the colony or province of Louisiana that it had when France possessed it.” It appears therefore that the western boundary of the colony or province of Louisiana, again in possession of the French was at the Rio Hondo as this was the boundary “when France possessed it.”

The greatest concern of the United States at this time was not the precise location of the western boundary of this territory but was the French possession of New Orleans by which they could control the Mississippi River and the Gulf. The concerns were best expressed in a letter from the president Thomas Jefferson to the American minister to France on the importance of New Orleans to the United States. The famous letter anticipated formal instructions requesting the minister to ascertain the terms upon which France would sell New Orleans and the Floridas to the United States. The letter states, in part, “The cession of Louisiana and the Floridas by Spain to France works most sorely on the United States. It completely reverses all the political relations of the United States and France. Of all nations, France is the one which, hitherto, has offered the fewest points on which we could have any conflict. There is however on the globe one single spot, the possession of which is our natural and habitual enemy. It is New Orleans, through which the produce of three-eights of our territory must pass to market, and from its fertility will long yield more than half our whole produce, and contain more than half of our inhabitants. France, placing herself in that door, assumes to us the attitude of defiance.”

Congress immediately appropriated $2,000,000.00 for the purchase of New Orleans and negotiations were opened with Napoleon for its purchase. Because of pressing matters in Europe, primarily of a military nature, and the almost defenseless position of France in Louisiana, Napoleon decided to sell not only New Orleans but the whole of the Louisiana territory.

The document for the cession of the Louisiana territory to the United States provided, in part: “..the French Republic doth hereby cede to the United States the said territory as fully and in the same manner as they have been acquired by the French Republic in virtue of the Treaty concluded with his Catholic Majesty. ” This document of cession again left the western boundary as had been specified in previous exchanges of the same territory. The American ministers attempted to have the boundaries more definitely stated, but when it was brought to already exist it would perhaps be a good policy to put one there. Perhaps this was “good politics” because it meant that the western boundary with Spain, who at this time was a weak and ineffective nation, might could be established by the United States as far to the west as they desired or at least as far as their power to command made possible. (As a matter of fact, President Jefferson, at one time, attempted to set the boundary as far to the west and south as the Rio Grande River).

it is important to note at this point that the United States divided its newly acquired lands into two territories, e.g. the Territory of Louisiana. The former conforms to what is the present State of Louisiana and it is in this area that, for the most part, the neutral ground established between Spain and the United States is located.

Having thus established the conditions precedent to the ensuing territorial dispute between Spain and the United States as to the western boundary of the Territory of Orleans we can look to the political intrigues and conspiracies leading to the agreement on a neutral ground in the disputed territory.

The political intrigues and conspiracies referred to are commonly known as the Burr conspiracy and part of its aims and purposes was to capture New Orleans, plunder the bank there, seize the military and naval stores and proceed on an expedition to conquer Mexico. The scope of these designs came to the attention of President Jefferson in October 1806. As has already been demonstrated the American government did not look favorably upon New Orleans being in possession of any but the United States so it became necessary to again initiate action to prevent such an eventuality.

In the meantime, in the year 1806, the territorial dispute between Spain and the United States heightened in its intensity and by the end of October military units of both nations had marched forward fully expecting an outbreak of hostilities. The American and Spanish forces faced each other across the Sabine but, interestingly enough, both commanders had been ordered not to precipitate any military engagement by crossing that river. Negotiations were in process in the hope of avoiding the outbreak of armed conflict. On November 8th president Jefferson instructed General Wilkinson “to hasten an accommodation with the Spanish Commandant on the Sabine, and as soon as that was effected to fall back with his principal force for the defense of the Mississippi River and New Orleans.” Wilkinson immediately dispatched a proposal to the Spanish that they remain west of the Sabine and the Americans east of the Arroyo Hondo leaving an unoccupied neutral ground between. A favorable reply was returned: an arrangement concluded which was commonly known as the Neutral Ground Treaty. Shortly thereafter, General Wilkinson returned to New Orleans where he began the business of fortifying the city against the scheme of Aaron Burr. The Neutral Ground Treaty seems to have avoided a fight for which “one nation was afraid and the other was glad of it” as both were preoccupied with more important considerations.

The “no-mans land” thus created was filled with lawless squatters who robbed and killed until 1810, when a joint expedition of Spanish and Americans drove them out. Robberies and murders were numerous along the San Antonio Trace and Nolan’s Trace however, until 1822, when Colonel Zachary Taylor built Fort Jesup and brought order to the lawless region. The Florida Treaty of 1819 fixed the western boundary of he Territory of Orleans, among others, but not until 1826 did the so-called “Free State of Sabine” really become a part of Louisiana.

The Florida Treaty, which ended the territorial dispute, fixed the western boundary as follows: Beginning “on the Gulph of Mexico, at the mouth of the River Sabine, in the sea, continuing north, along the western bank of that river…”, etc., etc.

Thus ended a period of over fifteen years during which men of intrigue, desperation or adventure came to the neutral ground for their various purposes. The legends and facts coming down to us in the intervening yeas are the basis of our reflections and of our SABINE FREE STATE FESTIVAL.