Second Weekend in May 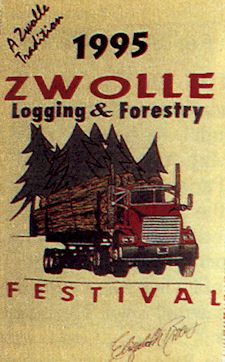 Poster from the first Loggers and Forestry Festival – 1995

Zwolle’s Logger Festival is held the second weekend of May to pay tribute to all the logging and forestry families and industries in the town and parish.

The success of the Tamale Fiesta in bringing people together and bringing tourists to the town encouraged Mayor Woods and his wife, Shirley, to begin another community celebration, the Zwolle Loggers & Forestry Festival. The first festival was held in 1995. The Festival includes a Blessing of the Fleet (logging trucks), parade, logging activities and contests, beauty pageants, music, food booths, arts and crafts, forestry exhibits.

Each year, the Zwolle Loggers Festival honors the oldest still active logger. The 1998 honoree was 82 year old Henry Remedies. Henry is still eating biscuits made each morning by his wife of 60 years. They have four daughters and dozens of grand kids.

In the 1998 hunting season, Henry found a beech tree where in 1934 he had carved his name and the date. To celebrate his return to the same location 64 years later, he again carved his name on the old beech tree, this time with a 1998 date.

Remedies, with a remarkable memory, recalls working for 50 cents a day and $3.00 a week. He remembers most of the major timber tracts he has cut in his lifetime. Probably less than his favorite memory but one he recalls vividly, is driving the “Sun Bus.” There were 24 men each morning on the bus. Upon reaching the woods, they divided into 12 two man teams, one for each end of a crosscut saw.

The organizers of Zwolle Loggers Festival philosophy is simply that a lot of lives are touched every day by trees. “We need to stop at least one weekend a year and salute the loggers and forestry industry”, Mattie Sepulvado says.