Always the 2nd Weekend of October 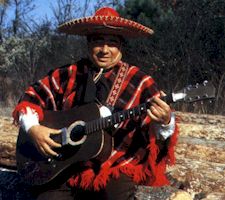 Recalls the area’s occupation by the Spanish Province of Texas. High School grounds, Zwolle, La. Fun-filled weekend of reliving the Spanish history of Texas with a plentiful supply of hot tamales, parades, concerts, crafts, dancing, and activities for the entire family.

It’s odd that a place with a Dutch name could be the Tamale Capital of the World since hot tamales have a distinct Indian/Spanish heritage. But the only thing Dutch about the town is the name. Zwolle was originally an Indian village which turned into a whistle stop on the Kansas City Southern railroad. The town was named for a town in Holland. Zwolle Mayor P.M. Woods said,”The name itself attracts international visitors wanting to see the U. S. counterpart.” In 1975 the idea for some type of festival was suggested by Rogers P. Loupe, who was then a member of the Sabine Tourist Commission. Mr. Roscoe Carruth, the director of the Sabine Parish Tourist Commission at the time, legitimized the idea for a Tamale Fiesta by incorporating the Zwolle Tamale Fiesta as a non-profit organization. The Tamale Fiesta calls the attention of many to the social and political influences of the Spanish culture upon Louisiana history since the 18th century.

Zwolle was first settled by the descendants of French and Spanish adventurers, who intermarried with the friendly Indians, as well as the English speaking settlers from Mississippi, Alabama, Georgia and the Carolinas. The Fiesta itself stems from a combination of the Indians and Spanish culinary efforts to produce the most delectable hot tamale in the country.