The Village of Fisher, last of the old sawmill towns built during the golden age of lumbering in Western Louisiana, was founded by Captain John Barber White and Oliver Williams Fisher.
The two men were close friends as well as business partners. Both were Missouri lumbermen. White, one of the great figures in the American lumbering industry, descended from a long line of lumbermen dating back to 1638. He was almost universally known as Captain White, a title which was bestowed when his summer cottage in the Ozarks was built with two chimneys. His neighbors only had one.

Captain White lived next door in Kansas City, Mo. to Arthur E. Stilwell, an empire building genius who promoted the construction of the Kansas City Southern Railroad. He built the line almost due south “from Shreveport through the forests of Louisiana” and located his Gulf of Mexico terminal at Port Arthur, Texas.

He fired the partners’ interest in the timberlands in Louisiana along the railroad’s right-of-way. Captain White and Fisher began exploring the area as early as 1897, but it was nearly two years before they were ready to act. They wanted to locate their sawmill in Many but were turned down because its citizenry did not want all that noise and dirt.

They purchased about 10,000 acres in the Sabine River country six miles south of Many and incorporated Louisiana Long Leaf Lumber Company, better known as 4-L, July 15, 1899. Since they could not locate in Many, it was necessary to build a town, which was named Fisher in honor of the company president and general manager. White was secretary-treasurer. They selected W. W. (Willard) Warren superintendent and because of medical problems involved in the operation of a swampland area, Warren took along Dr. Franklin White, the captain’s son.

When they left the train at the sawmill, the two young men found themselves in the midst of a great forest. The people in the area were hostile to northerners, hostile to corporations and distinctly unfriendly to anything that might disturb their way of life. They emphasized their dislike by shooting windows out of their cabin time after time. Although these ungracious acts did not drive them away, malaria almost did. They had to nurse each other through a succession of attacks. Despite these obstacles, the sawmill was built and many of the previous objectors found employment in the mill. 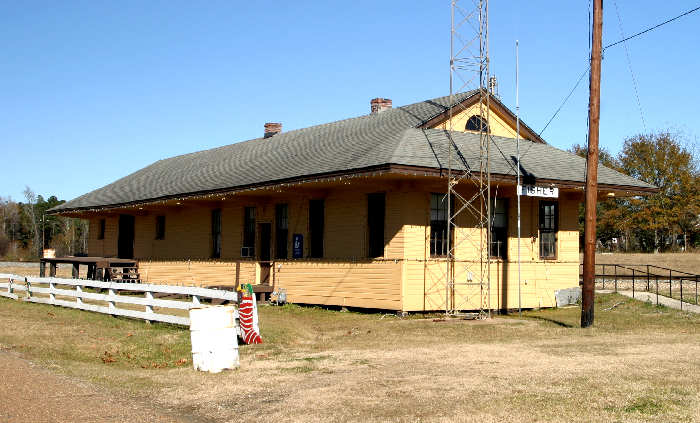 The original acres in Sabine Parish were augmented by a series of purchases of additional timberlands within a 35 mile radius of Fisher.

Fisher was the first large sawmill in the parish and contributed immeasurably to the economy. It was was considered one of the most important sawmill towns on the Kansas City Southern Railroad.

The work was for young men. Typical crews worked “from can to can’t” six days a week. In the early days, mule teams provided the power to pull the logs from the woods to the mill. Oxen and even some cows were used.

Logs were brought in log trains and dumped in the mill pond and herded across by boat to the jack ladder into the mill. The mill was powered by a steam turbine with one long drive shaft going all the way through the plant. Machines powered by belts and pulleys were connected to the central shaft.

The 4-L Company did not build a shanty town as some lumber companies did. Fisher was not a hastily arranged village of clapboard houses but was laid out with a view of “something more substantial”, according to John Belisle, author of The History of Sabine Parish.

“The town site is among the prettiest in Sabine Parish and was platted with uniform streets and avenues. Splendid homes have been built for the employees and in numerous instances furnished with all conveniences of a city, including electric lights and waterworks.”

The village was and is bisected by the KCS Railroad with the more pretentious homes for sawmill management on one side of the tracks and employee homes of lesser proportions on the other side. Traditional box frame houses were surrounded by whitewashed and planked fences. Unique were the wooden sidewalks in front of the homes and connecting the buildings.
The village also had an interdenominational church, a depot, hospital, hotel, and schools. The company employed two capable physicians to supply the medical needs of its employees.

The company commissary provided all the needs of life from the cradle to the grave and also had a large trade with people of the surrounding country. Many rode the KCS Railroad from north and south to trade at the store, particularly on Saturdays. According to Belisle, “the store furnishes the people with nearly every luxury which a city store or market could offer” as well as staple supplies. The town was an open market for the farmer and rural citizens found a ready and profitable sale for their products.

The first half of the building was constructed in 1900 and the second half in 1914.

People came from Leesville, Natchitoches, Many, and Mansfield to see movies in the opera house, the only “picture show” in this part of the state. 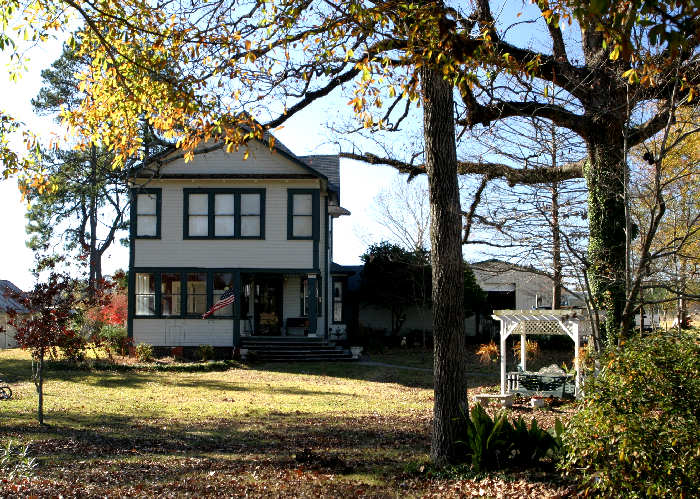 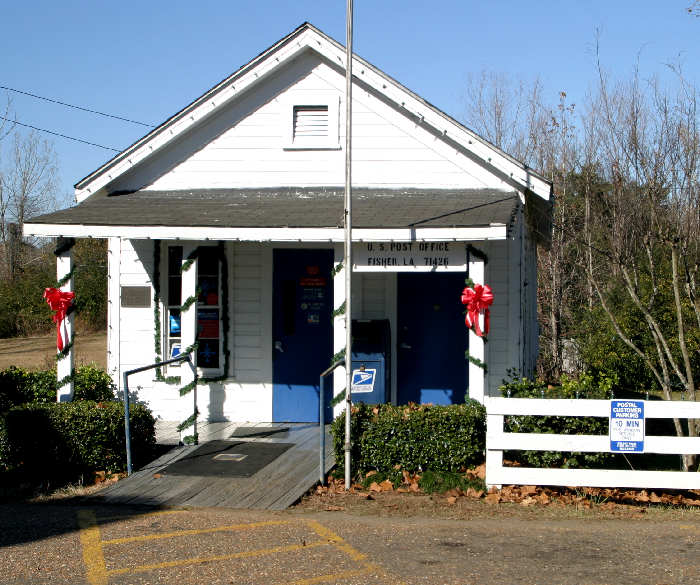 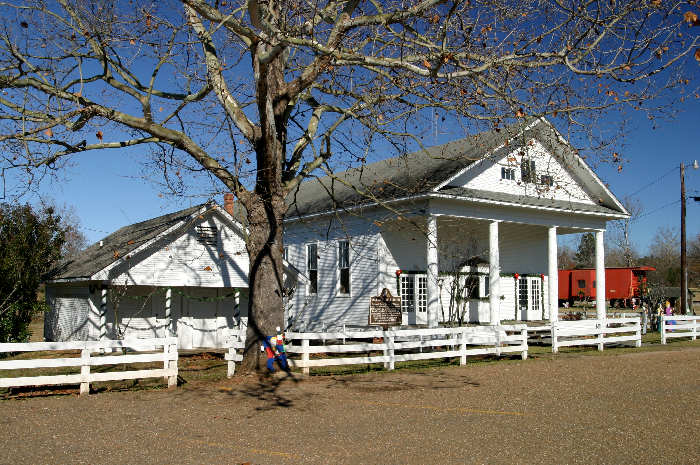 In addition, touring troupes from the Chautauqua circuit put on plays and stage shows, and stage celebrities played one night stands as they journeyed by train between Kansas City and Port Arthur, Texas. Famed country singer Hank Williams is reported to have sung there.

The 4-L Company logged out about 150,000 acres before the virgin timber was exhausted in the middle 1930s. Second growth trees, mainly short leaf pine, were then ready for cutting in some parts of the property. A somewhat haphazard cutting was systematized in the 1950s under which the company forester decided what trees were to be cut. About one-tenth of the acreage was covered each year by the woods crew. As a result their timber was constantly renewing itself.

When 4-L was in its 62nd year of continuous operation, it had produced more than one billion eight hundred feet of pine lumber and about one-tenth that amount of hardwood.

In the 1960s the sawmill and town were sold to Boise Cascade which was later transferred to Boise Southern. The new owners continued to operate the sawmill, but they subdivided the town and sold the homes and lots back to the residents.

Vancouver Plywood purchased the mill in January, 1970 as part of an integrated plywood and sawmill complex for Florien and Fisher. The company replaced the old mill with an all electric one. The replacement industry is a remanufacturing plant to saw cants from its Florien log utilization center into lumber. 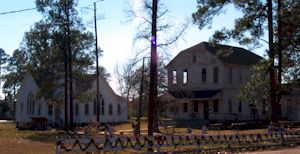 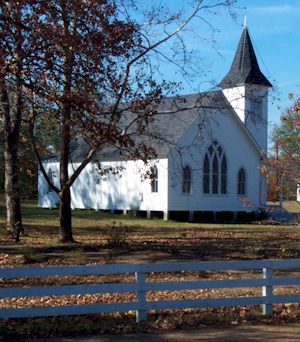 However, the town did not fare so well. The commissary store was closed, the hotel was sold for lumber and some of the houses were moved away. Passenger service from Kansas City to Port Arthur came to a halt May 10, 1968. People began to worry that the town was going to pass into oblivion as had happened to other sawmill towns. First, they incorporated the village in 1971 and organized Fisher Heritage Foundation, Inc. as their first moves toward preservation.

Boise Southern strengthened the preservation efforts by conveying the office complex centering the historic village to the Fisher Historic Foundation in special ceremonies November 20, 1972. Included in the property transfer were about nine and a half acres of land containing the two story office building, commissary, opera house, post office, paved parking lot, tree-shaded park and “the birds, bees, and the grass thereon”. The Kansas City Southern had previously presented the village with the depot.

Fisher historic district was entered in the National Register of Historic Places by the U. S. Department of the Interior, Heritage Conservation and Recreation Thursday, August 9, 1979.