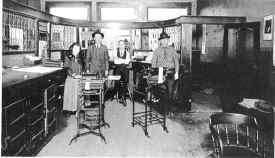 The town of Bronson was laid out in the spring of 1902, and the first lots were sold by the Santa Fe Town Site Company on July 4, 1902. A. D. Hamilton and J. W. Minton acted as representatives for the company.

The next buildings to be constructed were the residence of J. W. Minton and the building that housed the Hamilton-Pratt Mercantile Company. These buildings were probably completed in July of 1902.On May 14, 1902, work began on the erection of a boarding house to accommodate the employees of the railroad and the Kirby Lumber Company sawmill, both of which were in the course of construction. At that time the terminus of the coming railroad (Gulf, Beaumont & Great Northern), was still seven miles south of the town. The Kirby mill did not begin operations until December of the same year.

The railroad was completed to Bronson in June with the first construction train arriving on June 15th. The first retail goods sold in the town were disposed of from a freight car by J. W. Minton, general manager of the Hamilton-Pratt store. The general officers of this store were A. D. Hamilton, president; J. H. Kirby, vice-president; G. E. Pratt, secretary and treasurer; and J. W. Minton, general manager.

Hamilton-Pratt Merchantile Company, first retail store to open after the town of Bronson was created in July, 1902

Toole & Company (from Hemphill) also purchased a townsite during 1902 and constructed a building which housed their large mercantile company. J. O. Toole, the senior member of the firm, had been a merchant in Hemphill since 1885. J. P. Weatherred, a member of a pioneer Sabine County family, was a junior partner and managed the Bronson store.

During the same year, two physicians, Drs. R. D. Cousins and F. M. Fonville, began the practice of medicine in the town.

Among the other businesses established in Bronson during the latter part of 1902 were:

A weekly newspaper entitled The Bronson Bulletin, began publication in Bronson on November 14, 1902 under the direction of William A. Fields, publisher. It is not known how long the paper was published.

In looking at the above information which shows a considerable number of retail establishments opening up during the first six months of the life of the town, one might wonder how the town could support such a large group. The reason appears clear when one considers the manpower needed in the railroad construction, construction and operation of the Kirby Lumber Company sawmill, and the beginning of the cutting of the virgin pine timber of the county.

The townsite was named after Samuel Bronson Cooper, who served as United States Congressman from the First Congressional District from 1893 to 1905. The first post office was established in October 1902 with Nathan Pratt serving as the first postmaster.

For a number of years subsequent to the coming of the railroad, Bronson served as a passenger and freight terminal for most of Sabine County and in 1916 rail service was established between Bronson and Hemphill. However, changing transportation patterns over the years resulted in the discontinuance of rail passenger service through Sabine County, probably during the 1960s.

On March 5, 1905, the citizens of Bronson petitioned the county commissioners court for the formation of an independent school district. The petition was granted, and an election was held on March 20, 1905, with thirty-seven voting “For” and thirty-one voting “Against” the proposition. Other records of the commissioners court show that an election was held on October 29, 1904, to determine if the town should be incorporated. This issue was turned down by the voters; however, in response to another petition dated October 10, 1915, the issue concerning incorporation was resubmitted to the voters on October 20, 1915, with forty-eight voting “For” incorporation and forty-six voting “Against.” The court then ordered that the town be incorporated.

Today Bronson operates under a mayor-city council form of government and has a population of about two hundred.