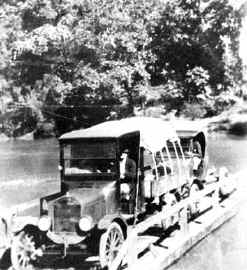 Crossing the Sabine River by ferry at Pendleton – circa 1925

This town was surveyed as a townsite by Thomas S. McFarland in 1837 at the request of D. Brown, San Augustine, to make a plat of a town to be located at Gaines Ferry on the Sabine River. The name of the town was to be Pendleton, a family name of James Gaines, who operated a ferry there. A copy of the plat of the townsite still survives and is on file in the state archives in Austin.

Pendleton was a port of entry for the collection of customs during the early years. Travelers on the Old San Antonio Road found adequate accommodations there, but changes in travel habits, as the years went by, caused the town to decline. When State Highway 21 was completed and a bridge built across the Sabine River at Pendleton connecting Texas with Louisiana, the ferry service was discontinued. The construction of this bridge began in 1935 and was completed in 1937. At that time a temporary (or detour) bridge was built to cross the river during the construction period, so perhaps the ferry service was not continued after 1935. 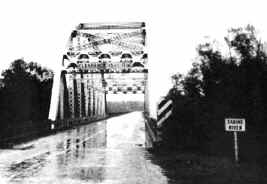 Since completion of the Toledo Bend Dam and Reservoir, the waters now at Pendleton are about three miles in width where once the ferry operated. Although most of the old town of Pendleton is gone, there are several new communities located in the immediate area around the perimeter of the old townsite.

The Republic of Texas established a post office at Pendleton, and in one document it appears that the name of the post office was ”Sabine.” James Gaines was the first postmaster during this time. The first United States Post Office was established (and so named) on March 8, 1847, with W. Strothers as postmaster.