Logging with oxen near Milam – circa 1905

Milam, while no longer a formally organized town, is one of the “hot spots” in Sabine County. The community is located in the northern part of Sabine County and is prominently situated on the famous El Camino Real.

The hardworking Milam Settlers Day Organization was formed in 1992 and the group keeps annual activities going in the small community. One such activity is Milam Settlers Day Celebration which is held each year the Saturday before Thanksgiving. The festivities, held at El Camino Park located in Milam, bring visitors from far and near. The day is set aside to promote Milam and the settlers who founded Milam.

Milam is Sabine County’s oldest town with a history that dates back to at least 1828 at which time it was called Red Mound. It is located about seven miles north of Hemphill at the intersection of State Highway 87 and State Highway 21, and was originally named for Benjamin Rush Milam. 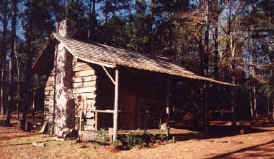 The restored Causey House – from the 1830s

The first written records pertaining to the establishment of a post office in Milam by the Republic of Texas is contained in a Notice for Contracts Open for Bid, dated September 14, 1838. This notice relates to a mail route from Nacogdoches through the town of Milam to Gaines Ferry (now Pendleton). W. H. Harris is shown as being the postmaster there in 1839. The first United States Past Office was established on May 22, 1846, with M. Weatherred, Jr. as the first postmaster.

In earlier times Milam was used as a campsite on the Old San Antonio Road. There still survives a record that Milam was incorporated in 1837, being the first incorporated town in Sabine County and perhaps in all of East Texas.

The town was the county seat of Sabine County until 1858 when it was moved to a more central location at Hemphill.

During the life of the Republic of Texas, Milam was a port of entry with a customs collector, and at one time was reported to have had two large race tracks and several inns and taverns. Today, Milam has a population of perhaps 180.

The Archives of the Texas State Library has on file a map with the following inscriptions, Map of the Town of Milam in Sabine County, dated July 11, 1850.

The State of Texas has placed a Historic Monument Marker at Milam, and the inscription on it is shown on the page listing Sabine County monuments and Markers.

For further information about Milam, you may contact the Milam Settlers Day Organization at 409-625-3155

More pictures of the restored Causey House – from the 1830s