Sabinetown, one of the first oil drilling rigs in Sabine County, circa 1916

Sabinetown (early documents show the spelling as Sabine Town) is located about eight miles east of Hemphill where Pale Gaucho Creek flows into the Sabine River, and was built on land donated by Shadrick Morris who obtained a land grant from Mexico on June 17, 1835. The townsite was surveyed by Herman Frazier in 1839.

The history of Sabinetown as a settlement began perhaps around 1820 with the establishment of a ferry on the Sabine River connecting Texas with Louisiana. Only one ferry connecting Sabine County and Louisiana antedates this one. It is the ferry established by James Gaines at Pendleton, a distance of about eight miles up the river.

The settlement developed into a busy shipping point during the years prior to the Civil War when steamboat transportation was feasible on Sabine River, and when water transportation was the principal means for carrying on distant commerce. As the town grew, it became a center of wholesale and retail trade, not only for local needs, but for the early immigrants traveling into Texas from the eastern part of the United States. While no census records exist, tradition is that there were from 500 to 600 homes in the town area, and with a population in excess of 2000. 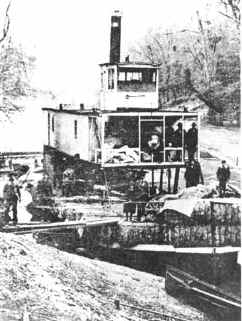 Sabinetown, 1895. The steamboat Maude Howell that made regular trips up the Sabine River as far as Logansport with Sabinetown as a major port. Miscellaneous freight came upriver with cotton and lumber the main cargo on return trips.

The Mexican government established a customs house there, and it was continued when Texas gained independence. Also, during the time of the Mexican rule, a rude fortress was built on a high bluff overlooking the ferry for the purpose of providing safety for the crossing. Four cannon were reputedly part of the fort’s armament, but it is not known if they were ever fired.

During the Civil War when Union troops were known to be advancing westward through the central part of Louisiana, a Colonel Jessup was in charge of a small detachment of Confederate troops who threw up an earthen breastwork on the Louisiana side of the river. Also, some dirt fortifications were erected near the river around the town. Fortunately, these fortifications were never needed.

Records of the postal system during the years of the Republic show that a Martin Fearing was a postmaster at Sabine Town on September 8, 1840. The first United States Post Office was established on May 22, 1846 with George L. Clapp as the first postmaster. The post office was discontinued and later reestablished on several occasions, with the final closing of the post office on October 31, 1935.

With the end of the Civil War, the coming of changing transportation patterns, and with the utilization of other river crossings to the north, the importance of Sabinetown began to diminish and the town’ s population began a steady decline. Ultimately, it became only a small isolated community resting on the banks of the river. With the construction of Toledo Bend Dam and Reservoir parts of the old town were inundated; however, several new lakeside communities encircle the general area of the old townsite.

A drawing entitled Map of the Town of Sabine Town is on file in the state archives in Austin. Although undated, it is perhaps a copy of the original plat prepared by Herman Frazier in 1839.