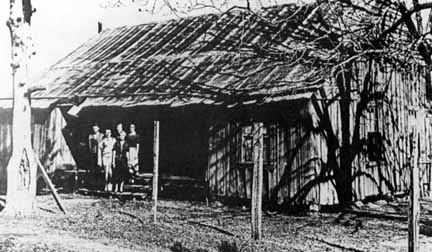 George Robert Matthews house in Geneva, built around 1888 photo circa 1951

The community of Geneva is located in the northwest portion of Sabine County, near the San Augustine County line.

Geneva, located on the El Camino Real, is a quaint area of the county with lots of history to be explored. Historical markers can be found in and near Geneva.

Geneva, formerly called “Jimtown” after the first names of two early settlers, Jim Halbert and Jim Willis, is located at the intersection of State Highway 21 and Farm Road 330 in the “Redlands” of the northwestern part of Sabine County. It is considered to be the oldest continuous occupied site in East Texas having roots dating back to September 13, 1794, when Spain granted to Juan Ignatio Pifermo four leagues of land lying in the vicinity of the present-day community.

Two Texas Historic Landmark markers, the Jones-Sweet House, and the Site of the Historic Spanish Rancho called El Lobanillo , have been placed in Geneva by the Texas Historical Commission.

During the rule of Spain and Mexico this area was thinly settled with the principal growth of the community coming between 1850 and 1920. By this time it had become one of the more prosperous agricultural areas in Sabine County. Before the coming of the automobile and an adequate road system, the business area of Geneva consisted of as many as five retail stores at one time. There was a cotton gin, a gristmill, a hotel (operated by the Howard family), and a livery stable. Several doctors practiced medicine there over the years with one of the best known being Dr. Robert W. Chapman. During 1905-1908, Dr. Chapman also served as state representative for Sabine County.

The first independent school district in the county was organized in Geneva during 1904, and continued until about 1942 when it was consolidated with the school in Hemphill. During the school year 1934-1935, the community had a scholastic population of 351 with nine teachers being employed during that year.There is no record of a post office having been established during the years of the Republic, and possibly mail was received and dispatched through Milam or San Augustine. The United States Post Office in Geneva today was organized on July 23, 1884, with William W. Johnson serving as the first postmaster.

Some of the store owners during earlier years were D. S. Dean, T. E. Alford, C. A. Jones, and B. D. Jones. A Baptist minister by the name of Alfred Harris once operated a gristmill there. Other store owners were:

The last cotton gin to be operated in Sabine County was located in Geneva and was owned by Joe Harris, Jr. This gin ceased operations during the latter part of 1959. Other gin owners prior to this time included Buck Griffin, Dan Alford and C. G. Minton.Myrtle Springs Cemetery, located on the outskirts of the community, dates back to around 1870 and is situated on two acres of land donated by Elias and Fanny Beall. At least one member of the Army of the Confederacy, James T. Meader, a member of Company H, 38th Mississippi Rifles, is buried there.