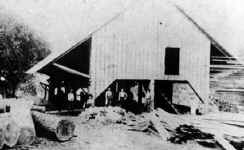 Brookeland is located in the extreme southwestern part of Sabine County and was named for the John C. Brooke family. The first United States Post Office was established there in 1866 with John C. Brooke as the first postmaster.

The Gulf, Beaumont, and Great Northern Railway, which was constructed northward from Beaumont, passed through Brookeland in 1902 at which time the town became the first terminus in Sabine County for both passenger and rail service.

In 1902 a new town was laid out about one mile from Brookeland, and was named Weed in honor of the engineer who laid out the townsite. The new name was never popular and eventually both areas became known under the old name.

Brookeland State Bank was opened in 1910 and continued operation until 1933ï¿½ In addition to several retail businesses, a Ford automobile agency nourished there during the 1920s.

The Walker Hotel in Brookeland
circa 1910

During the Great Depression of the 1930s, the town population gradually declined; however, with the completion of the Sam Rayburn Lake, whose perimeter lies nearby, the population has increased to perhaps its former level.

With the construction of US Highway 96 in 1926, which bypassed the old town, together with the relocation of the railroad caused by the construction of Sam Rayburn Lake, very little remains that will permit one to envision the thriving town that it once was.

Class of 1927…my mother’s class at Brookeland High School. She is the one standing by the only boy and is short, with dark curley hair.

The little girl in the goat cart is my mother, Helen Claire Williams, and her brother behind her is Orren Pratt “Buddy” Williams. I have no idea who the men are, but my mother told me they were “drummers” or salesmen.

The whole high school. My uncle was a teacher and his name was Ben O. Scheide. He is standing on the back row about the middle of the picutre and has on a tie.